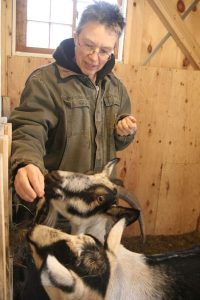 “To me, Marlboro College will always be the place where the goal in organic chemistry was to understand the mechanisms and processes rather than to memorize long lists of reactions,” said Alison Mott, who attended Marlboro in the 1980s and remembers it fondly. “I always loved science, and Marlboro did not kill that in me.”

Alison has remained in the area, and returned to Marlboro several times as a visiting faculty in dance in the 1990s and 2000s, teaching a variety of dance technique, composition, and repertory classes. She appreciated that so much of the student body participated in dance classes and performances, even when dance didn’t have anything to do with their Plan of Concentration.

“Everyone had to figure out where their growing edge was—whether it was mastering some complicated turn or fall, or just figuring out which foot to move first—and take responsibility for their own learning because everyone was working at a different level. So I guess it comes down to the same thing: We have an opportunity here to teach and learn from love.”

Alison’s father had always shared her enthusiasm about Marlboro, so when he passed away last year and left a small inheritance, she felt it was fitting to reconnect him with Marlboro in the form of a gift to the college. It was also fitting for Alison, given her renewed sense of optimism about the college’s future.

“The vision that President Kevin holds out with the Renaissance Scholarships is deeply exciting,” said Alison, who remains connected to the community as the partner of Meg Mott, politics professor. She works behind the cheese counter at the Brattleboro Food Coop and raises milk goats and veggies on their Panic Swamp Farm. “A Marlboro full of rugged, engaged, curious ‘goats’ doing work that matters in the world…. What could be better?”