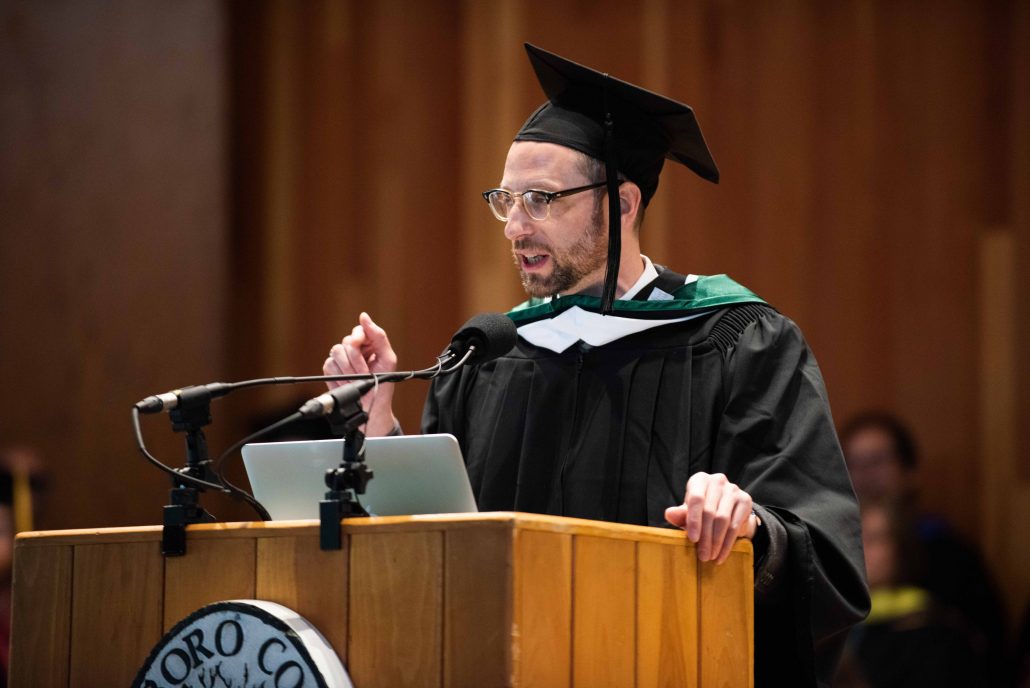 They call this a mortar board, which I think is an appropriate name for it. It’s not just a laurel for all of the hard work you’ve done to date. It’s the slate that you’ll be working from as you build the rest of your lives brick by brick.

That’s how I wanted to start my student commencement speech when I was senior graduating from this college in 1993. Unfortunately I didn’t really tell anybody I wanted to do that. I just thought maybe it would be conferred upon me. It was not.

If part of the purpose of a commencement speech is to give advice, let that be my first suggestion: if you want something, you should probably at least attempt to get it — unless it’s, like, revenge or something. Luckily, my classmate Laura Hinerfeld did an amazing job.

I’m gonna talk about my own experiences up here some because they’re what I have at hand. Obviously, any individual person’s life is the most anecdotal of anecdotes. But I think it might help make a point that I wish someone had made to me when I was graduating.

Whenever anyone asks me what I majored in in college I always make the same joke. Which is I say “theater and creative writing, both very lucrative fields of study.” I had no idea idea what I wanted to do when I left here. I knew I wanted to write. I didn’t know what about. I figured I’d go into publishing to support my writing but I didn’t know what people in publishing did. So I sent out all of these cover letters that made no sense, accompanied by a resume that featured zero relevant experience.

I fell into public radio by accident. Literally, my best friend’s girlfriend had a friend who worked at WBUR in Boston and said there were internships there. I was 25 by the way, so this was four years after I graduated. And I figured, “What the hell? Maybe it’ll lead to a good letter of recommendation that’ll help me apply for jobs. You know, in publishing.” But I instantaneously fell in love with making radio. Talking on the radio is even more satisfying to me than back when I was on stage. In the broadcast business we actually call it “performing.” We call the stories we write for radio “scripts.” Writing a radio script takes a bit of the rigor of writing a poem. And you do well in my profession if you write imaginatively — not to say creatively. Perhaps you can see where this is going. I didn’t know, when I was attending Marlboro, that I was actually training for this job I would end up passionately wanting to do.

Do y’all know the movie The Karate Kid? The first one? With Ralph Macchio and Pat Morita? I think about that movie all the time. It’s very dated, but it also contains within it a truth that people don’t tell you when you’re graduating from college. So I’m going tell you. So, briefly, Danny LaRusso (Ralph Macchio) goes to the karate master Mr. Miyagi played by Pat Morita and he says “I wanna learn karate.” And Mr. Miyagi says “Okay, sure. But first… um… wax all my cars. Sand my floors. Paint my fence. Both the slats and the trim. And do it in this special way. Wax on. Wax off. Breathe. Repeat.” You know, conscious movements. And after a while of this, Ralph Macchio feels like he’s being exploited. So he goes and confronts Mr. Miyagi and says, “What the hell, man? I thought you were gonna teach me karate.” And Mr. Miyagi says “I am.” And he starts throwing all these punches and kicks at him. And Ralph Macchio is like [gesturing] “Wax on! Wax off! Paint the fence!” and blocks every single throw. And he’s like “Oh! Oh. I know karate. I didn’t know I was learning karate. I didn’t know I was learning karate.”

This has happened to me in my life over and over again.

My boss Ira Glass will tell you that I turned down the job at This American Lifethree times before I finally came on staff—which is the truth, but not the whole truth. What he conveniently forgets is, prior to that, I applied for the job four times over the course of ten years and was turned down every single time. Until finally something in me said “I had better come up with some other dreams ‘cause this one isn’t come true.” So I did. And I set about trying to achieve those new dreams. And then, in 2009, Ira called and asked me if I could fill in on staff for someone who was going maternity leave. And I almost said “no” because now there were all of these other things I wanted to do. And I got a little frustrated with him on the phone and I said, “Ira, I thought you didn’t think I could do this job.” And he said, “Well that was a long time ago. You’ve become a really senior producer.” And I thought “When did that happen?” All that time I was out there in the radio wilderness, producing stories for other shows, entertaining myself as best as I could, being as creative as I knew how, all those years, I was learning karate.

And writing and performing are not the only ways in which this place inculcated me with surprisingly marketable tools without my knowing it.

Kevin mentioned the story I did about Whitman and Leaves of Grass for Studio 360. I just wanna play the very beginning of that story because again I think it makes the point. This is how it started.

AUDIO:
T: This is a facsimile of the first edition
SC: Oh wow
T. Hunter Wilson is the person who first turned me onto Leaves of Grass. He was my poetry professor at Marlboro College in Vermont. And yes, he and I are such Whitman geeks, we can even get excited about a facsimile. It’s almost an exact duplicate of the original.
T: It’s about 8’ by 12”, something like that.
8 by 10
T: So there’s a kind of even visual generosity to it.

I’ll just skip ahead here. I’m talking about how there was no name on the title page of the first edition.

AUDIO:
It just says Leaves of Grass, Brooklyn New York, and opposite that, a picture.
SC: Oh there he is.
T: That’s not what a 19th century author was supposed to look like. This is a hayseed. This is… slightly baggy pants. Standing with hand cocked on his hip. His hat pushed back looking sort of as if he’s about to say… “Weeeeeell, that’s an interesting point of view.”

Does this sound familiar? I mean, it’s basically a tutorial. And this story was assigned to me but, the thing is, I wrote 50 pages about Leaves of Grass over there in science building as part of my plan when went to school here. And back then, no one in the world could have convinced me that, twenty years later, instead of paying tens of thousands of dollars a year to talk with T. Wilson about Walt Whitman, I instead would be getting paid to talk with T. Wilson about Walt Whitman. It is the most ridiculously on-the-nose example of “using your college degree” I can think of.

But here’s the real way in which, all that time at Marlboro, I was actually learning karate and you’ve been learning karate. Here’s the superpower this place has given you. You have learned how to obsess about something — to focus on one thing for an extended period of time, and labor for long, difficult hours over months and months to produce a hard-bound collection of orderly ideas about that thing. My dear, new siblings: that was hard what you did. You have already achieved something that initially seemed impossible. You went through the kind of strangling panic that can only be induced by work. You thought you might have to push your deadline. You didn’t. Or, God Bless you, you actually did push your deadline. You were realistic and asked for help. A karate master from someplace else entirely came to campus and threw a bunch of punches and kicks at you and you blocked them all. There are ways you don’t know about yet in which you are already prepared, more than a lot of people, for the big tournament at the end of the movie.

So, really, more than advising you, I simply want to assure you: you will be fine. We Marlboro grads do really interesting things. Do you want to know why they asked me to come and give this commencement speech? Because I’m the only one who wasn’t either out of the country or busy saving people’s lives. And sometimes you won’t have been able to predict in a million years the interesting things you’ll wind up doing. As in my case. And yet, because I learned how to obsess, and stay up all night, and care, I was prepared. And, in my case, the interesting thing I wound up doing is what allowed me to give the commencement speech at Marlboro College graduation which is precisely what I had wanted in the first place 26 years ago.

So don’t worry. Don’t worry. I’m so honored and grateful to have this chance to talk to you. I’ve met a bunch of you. I couldn’t be more excited about how all of you are gonna benefit the world.

So, congratulations. Off you go. Thanks.