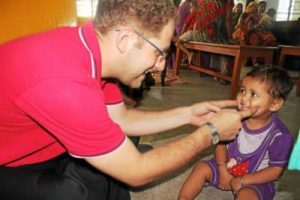 Since 2002, Noah Levinson ’05 has been providing health and nutrition services to pregnant women, mothers, and their children in underserved slums in and around Kolkata, India. Now Noah, cofounder of Calcutta Kids, has been recognized for his work by the Caring Institute, receiving a 2015 National Caring Award on October 30. He was also inducted into the Caring Hall of Fame, located in the Frederick Douglass Museum in Washington, DC.

“I see this as an award for Calcutta Kids and the outstanding work that our team does day in and day out in the slum community in which we work,” said Noah, in an article in the Brattleboro Reformer. “The honor is for our community health workers, who create change in deplorable health statistics by becoming friends to the pregnant women and mothers with whom we work.”

Noah graduated from the World Studies Program (WSP) at Marlboro, with a Plan of Concentration in Development Studies. He spent his WSP internship was in India, having raised $30,000 to start a mobile health clinic that was the beginning of Calcutta Kids. Noah recently moved to Massachusetts with his wife Evangeline Ambat, to pursue graduate study, but continues to travel to India four times a year.