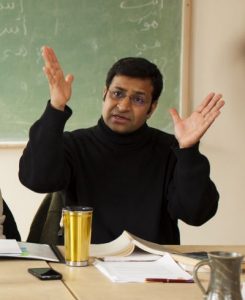 “These books will provide us the chance to look through the perceptions of another culture,” said religion professor Amer Latif, who is leading a book discussion series on Muslim literature and culture at the Brooks Memorial Library, in Brattleboro. The series, titled Muslim Journeys, includes five books to be discussed on five Wednesday evenings, stretching from April through June 11. Titles discussed range from the classic Arabian Nights to the contemporary Minaret, by Leila Aboulela, a novel challenging the perception that Islam oppresses women.

In an April 9 article in The Commons, Amer said that his goal in leading the series is to “share Muslim voices free from some social issues in order to help others see truths that are transcultural.” He believes that through exploring the specific meanings of the words in these books, an understanding between people—and cultures—becomes possible. The series is presented by Amer on behalf of the National Endowment for the Humanities, as part of their Bridging Cultures initiative, in collaboration with the American Library Association and Ali Vural Ak Center for Global Islamic Studies. It is funded in part by the Friends of Brooks Memorial Library and the Vermont Humanities Council.