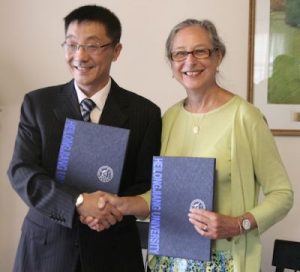 Marlboro College was pleased to receive four dignitaries from Heilongjiang University, People’s Republic of China, for the official signing of a memorandum of agreement between the two institutions on July 24. Prof. Zhang Zhengwen, president, and three other administrators from the university met with faculty on both the undergraduate campus and the graduate campus in Brattleboro. The highlight was a meeting with Ellen McCulloch-Lovell, Marlboro president, to sign the memorandum and exchange gifts, including bowls from alumna Anna Vogler Littman ’00.

The new agreement is based on negotiations that began last July with a visit to China by Chinese professor Grant Li and Dean of Faculty Richard Glejzer. The memorandum states that Marlboro College and Heilongjiang University will “commit to mutual and reciprocal cooperation toward the shared goal of the internationalization of higher education.” Specifically, the two institutions will encourage the exchange of students, as well as the exchange of faculty or research fellows and collaboration on research and conferences.

“Although they were only here a short time, our visitors from Heilongjiang left impressed with Marlboro and the kinds of teaching and learning that our self-directed, liberal arts model can provide,” said Richard. “The president said that he very much enjoyed getting to know Marlboro and looks forward to a long relationship between our institutions.”