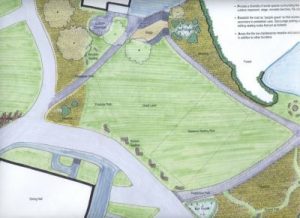 This spring and early summer will see some significant changes to the open space between the dining hall and campus center, the focal point for many campus activities. The redesign of “The Meadows,” as the area has been called, was accomplished with the initiative and support of students, faculty and staff over the past year. The project is part of a larger landscaping effort funded by a generous donor and led by the Regenerative Design Group (RDG), a permaculture-inspired landscape design firm based in Greenfield, Massachusetts. In the fall semester, professionals from RDG taught a course on the principles of design to regenerate natural and human communities, focusing on the Meadows as class project.

“Ideas about what we wanted in the Meadows were gathered from the community, and initial designs were drawn up,” said William Edelglass, philosophy professor and member of the Standing Building Committee that oversees campus improvements. “These designs were then presented at Town Meeting and hung on a board in the dining hall to gather feedback and more ideas. The final design is now complete and will be implemented soon.”

Some of changes will be visible as early as April, when one of the Work Day projects is to expose the ledge between the dining hall and the OP building. During the week before commencement, a one-credit class will be learning about implementing the design and planting in three areas, including companion species for apple trees and native rocky outcrop plant communities on exposed ledge. Larger changes to the Meadows will take place shortly after graduation. These include a large level lawn for games and activities, a wildflower meadow, a stage for performances, an outdoor classroom, benches for smaller gatherings or study and a raised stone fireplace.

“The redesign of the Meadows area will create a more inviting, beautiful, useful and cohesive heart of the Marlboro campus,” added William.