Marlboro College joins three other local institutions in celebrating a new $150,000, multi-year, “Creating Humanities Communities” matching grant from the National Endowment for the Humanities (NEH). The grant is focused on sharing the Brattleboro area’s rich history of words—stories, literature, publishing, printing—to cultivate a greater sense of place for those who live here and attract and inform visitors to the area.

Titled “Peoples, Places, and the History of Words in Brattleboro, Vermont,” the three-year project plans to build community through collaborative activities including creating audio tours, exhibitions, and a book on the rich printing and publishing history of the area. These materials will bring to light the writings and history of less documented groups, including Abenakis, African Americans, and women, in addition to more prominent local authors such as Rudyard Kipling, Mary Wilkins Freeman, and Saul Bellow.

“The project really builds on this concept of place-based learning by linking physical places to their history,” said William Edelglass, professor of philosophy at Marlboro College, who spearheaded the submission of the grant with project director Lissa Weinmann. According to William, Marlboro’s MA in Teaching for Social Justice program will help facilitate classroom work on local literary history in conjunction with the Windham Southeast Supervisory Union (WSESU) school district.

“We will bring scholars to classrooms who will engage students in exploring place from a variety of humanities lenses—philosophy, history, art, and sociology, and offering research, cartography, and other skills,” continued William. “They will also raise questions about the meaning of the history of these places that will be addressed in handmade books, audio pods, and other media.”

Marlboro collaborated with three other local institutions—Brattleboro Literary Festival, the Brattleboro Historical Society, and Write Action—to submit the winning grant. These institutions are currently joined in support of the project by Brooks Memorial Library, WSESU, the Downtown Brattleboro Alliance, the River Gallery School of Art, the Landmark Trust, and The Commons newspaper, among several others. 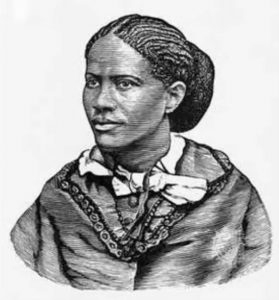 The project kicks-off at the 2017 Brattleboro Literary Festival, including a demonstration of the new Mobile Interactive Literary Exhibition Space (MILES), a mobile mini-museum featuring an exhibit about Lucy Terry Prince (pictured, right), the nation’s first African American poet. Prince’s biographer Gretchen Holbrook Gerzina ’72, dean of the Commonwealth Honors College at University of Massachusetts–Amherst and a Marlboro College alumna, will be a featured author at the literary festival.