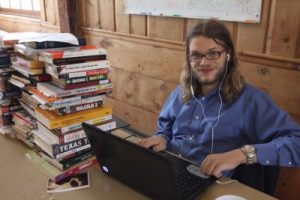 “Daniel has served both the campus community as well as the broader community of Windham County in a variety of ways,” says Jodi Clark, Marlboro College director of housing, about Daniel Kalla ’14. Daniel was this year’s recipient of the Engaged Student Award from the Vermont Campus Compact, a statewide consortium of 18 colleges formed to “strengthen communities and educate for informed and active citizenship.”

Daniel has served at Marlboro as head selectperson, a member of community court, as well as a resident assistant. He co-facilitates student trips for the local blood donation day, and has hosted campus conversations on positive relationship communication. For one evening a month, Daniel volunteers as a reparative probation panelist with the Brattleboro Community Justice Center, as well as pursuing a non-profit management certificate and TESOL certification (earning his teaching practicum in Costa Rica). His interests in education and restorative justice have led him to a Plan of Concentration focusing on the United States’ prison system and alternatives to incarceration.