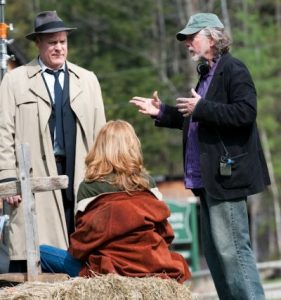 “Vermont stories are worth telling,” says Jay Craven, Marlboro College professor of film and video, in in the July/August 2013 issue of Orion magazine. “There is a population here that never sees its own culture, its own history, its own characters, validated in the mainstream cinema. When a Hollywood film uses the region, it tends to caricature or stereotype the region. Why not have stories told from where we are about who we are?”

In an article titled “On Location,” Jay is held up as a prime example of someone doing vital regional cinema that embodies the character and genius of a place in all its mystery, magnificence, and pain. While most of the movie industry is concentrated and centralized in southern California, Jay is breaking the mold by shooting low-budget regional films, holding Vermont casting calls and using Vermonters in his crew. To shoot Northern Borders, his newest film inspired by a novel from Vermont author Howard Frank Moser, Jay assembled 34 students and recent graduates from 15 colleges for a film-intensive semester at Marlboro College. He is planning on another Movies from Marlboro intensive for the spring 2014 semester.