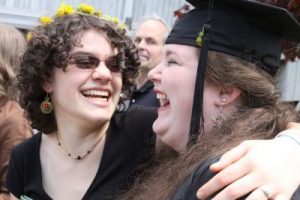 “The solutions to very few problems are black or white,” said U.S. Senator Patrick Leahy, who addressed Marlboro College faculty, family, and friends gathered to celebrate the 49 members of the class of 2015 on May 17. “Use the tools of critical thinking you acquired at this school to differentiate fact from fiction, and political correctness from reality. You were taught to think here—not just learn, but to think…I wish more people were.”

Leahy’s commencement address gave an insider’s look at the patient diplomacy that has led to a softening of sanctions against Cuba, with important lessons for the graduates about how to make a difference in the world. The audience was also regaled by Ellen McCulloch-Lovell, in her last official role as Marlboro president, as well as a moving speech about solitude by senior speaker Maya Rohr.

“The most important thing we can do is to go out into the world and try to have the sorts of conversations we have here, but have them more often,” said Maya, who did her Plan of Concentration in ceramics and literature. “I’m not just talking to graduates. Underclassmen, faculty, staff, everyone: each of you has a perspective, and if you keep it to yourself, we’re going down.”

Honorary degrees were conferred upon Senator Leahy, his wife Marcelle Pomerleau Leahy, and longtime Marlboro trustee Ted Wendell, and the ceremony was closed with a valediction by Marlboro’s own religion professor Amer Latif.

“I wish for you the harmony of opposites,” said Amer. “That through this harmony you become a blessing to yourself, and a blessing to all beings in this world.”