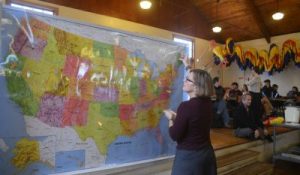 “We’ve got this very small community that’s very close, with all people who are very invested in what they’re doing,” said sophomore Alessandro Pane in the Marketplace report. “It can make it a very intense environment.” The report by education correspondent Amy Scott focuses on Marlboro’s unique strategy to address the shrinking enrollment experienced by small liberal arts colleges nationally.

“Every school is looking for that very limited commodity, which is that incoming class,” said Brigid Lawler, dean of graduate and undergraduate admissions, who was profiled in the second Marketplace report. Recent admissions efforts, including the Renaissance Scholars program, have raised application levels by 30 percent over last year at this time. “We had to do something that was audacious,” adds Brigid.

Learn more about the Renaissance Scholars program on NPR

Why is Marlboro College launching the Renaissance Scholars program now?
Enrollment is down, despite offering a rich student experience that cannot be replicated many places. The program is expected to attract students with diverse opinions and backgrounds to campus and enhance both student and community experience.

How is Marlboro paying for this new program?
Through a short-term dip into our $40 million endowment, a robust endowment for a college this size and intended to sustain our mission during difficult times.

Are Renaissance Scholars eligible for other financial aid?
Yes, after they have completed the FAFSA form, additional aid monies may be awarded to students to cover things like room and board.

Does the program also help students other than those that receive full scholarships?
Yes, Marlboro has also increased the financial packages for all admitted students.

What is the average student loan debt of Marlboro graduates?
Even before the Renaissance Scholars program, Marlboro average student debt was $18,847, over $14,000 less than the national average of $33,000.

What efforts are being made to increase retention?
Student life enhancements, dorm upgrades, and assessments of the academic model by the Renaissance Committee, which includes faculty members John Sheehy and Brenda Foley as well as Sean Conley, chief learning officer.