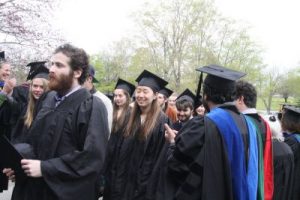 “I learned to trust myself here, because I was trusted,” said Laura “Rainbow” Stakiwicz, undergraduate student speaker for the 69th commencement of Marlboro College, held in Persons Auditorium on Sunday, May 15, 2016. “I learned to value myself because I was valued. Because you believed in me, Marlboro, I have learned to walk hand in hand with my fear.”

This year marked the first Marlboro commencement that combined both undergraduate and graduate programs, conferring degrees upon 47 seniors and 20 more from Marlboro College Graduate and Professional Studies programs. The graduate programs have held their own commencement in Brattleboro since their founding 19 years ago, but were included this year as part of the effort to unify the campuses and build on their complementary strengths.

“Both programs infuse a deep sense of membership in a distinctive learning community, enable careers of purpose, and enrich lives,” said President Kevin Quigley in his address, marking his first commencement on Potash Hill. “They create ripples of influence spreading out from southern Vermont, across the nation, and around the world, wherever our alumni make their mark.”

In addition to Rainbow’s student address, graduating MA in Teaching with Technology student and double alumna Heidi Doyle ’94 shared remarkable similarities between the Marlboro’s undergraduate and graduate programs. Honorary degrees were conferred upon Robert Gard, Jr., chairman of the board at the Center for Arms Control and Non-Proliferation, and Nadinne Cruz, an advocate and practitioner of service learning and experiential education in colleges and universities across the country.

“We are so honored to include these two inspiring examples of service, stewardship, and social innovation in our commencement ceremony,” said Kevin. Valedictions were offered by Luis Rosa, dean of students for the undergraduate campus, and Lori Hanau, community builder and faculty member for graduate and professional studies.