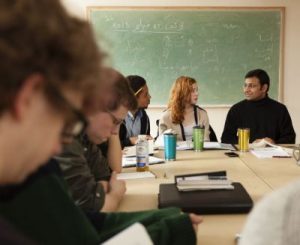 Marlboro College is once again featured and receives high ratings in The Princeton Review’s new 2014 edition of its annual college guide, The Best 378 Colleges. Notably, the education services company ranks Marlboro #1 nationally for “Professors Get High Marks,” and gives the college an overall academic rating of 99, their highest rating.

“The ‘incredibly sharp-witted and compassionate’ faculty members at Marlboro ‘have strong personalities,’ and relationships with professors are ‘really intimate (in a good way),’” says the guide, quoting surveys filled out by Marlboro students. “‘By the end of a class—provided you participate—they know you well, and you know them well,’ says a student. There’s definitely ‘a relaxed, humorous atmosphere that manages to coexist with the intense academics, somehow.’”

“Of course we’ve always been proud of the excellent professors we bring to Marlboro, including their high standard of teaching and a very substantial role in the vision and day-to-day operations of this academic community,” said Ellen McCulloch-Lovell, Marlboro College president. “It is rewarding to see Marlboro recognized so positively among several diverse categories this year from academic to student life.”

Marlboro also received high rankings for “Students Study the Most” (#3), “Most Liberal Students” (#5), and, a testament to the general lack of focus on organized sports, “There’s a Game?” (#5). Marlboro was ranked 19th for being “LGBT-Friendly” and 20th for “Most Politically Active Students” out of all 378 colleges included. The college received a 99 for “Professors Interesting,” their highest rating, and a 94 for “Professors Accessible.”