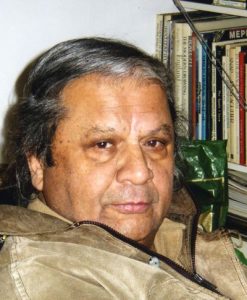 “Teaching and learning go together,” said Jaysinh “Birje” Birjepatil. “One learns such a lot from interacting with students.” Marlboro College and the greater community celebrates the life of Birje, literature professor emeritus, who died on January 18, 2015, in Vadodara, India.

Born and brought up in India, Birje studied at Maharaja Sayajirao University (MSU) of Baroda before completing his Ph.D. from Manchester University, in the United Kingdom. He was also a trained actor with certificates from the London Academy of Music and Dramatic Art. He served a postdoctoral fellowship at Yale University, then returned to India to teach at MSU, where he served as head of the English department in the 1970s and ‘80s, as well as dean of the faculty of arts, before settling in the United States.

Birje taught at Brown University for two years. There he learned about an opening at Marlboro College during a dinner party, and the rest is literary history. He spent 15 years teaching at Marlboro, where he was much admired for his vast knowledge and gentle kindness, until he retired in 2002.

“When around Birje, one cannot help but feel like a swimmer in the vastness of history, literature, and culture,” wrote Lauren Beigel in an article in Potash Hill marking his retirement. “Even with his wealth of knowledge, Birje still listens and learns from his students” those just stumbling into a world in which he has been immersed for so long.”

“Working with Birje is a bit like spending time in the Louvre: you just get lost,” said Ian Garthwait ’01. “There are maps to show you where things are, but it’s up to you to pick out your interests and find your way there.”

In addition to teaching literature at Marlboro, Birje actively collaborated with theater professors Paul Nelson and Eric Bass, religion professor Jet Thomas, and other colleagues. He also brought a crucial element of multicultural perspective at a time when the World Studies Program was first getting off the ground, and attracted several international scholars to the Marlboro campus. An acknowledged Kipling scholar, Birje said he “had a ringside seat” when the college acquired a significant collection of Kipling manuscripts and other artifacts (Potash Hill, Winter 2014).

Despite his patient dedication to teaching, Birje also found time to write several literary works, including articles in scholarly journals in India and Beyond the Axle Tree, a study of T.S. Eliot. His short stories were included in The Way We Were: Anglo-Indian Chronicles and in the fiction issue of South Asian Review, and his poetry appeared literary magazines and anthologies. He published the novels Chinnery’s Hotel and The Good Muslim of Jackson Heights after his retirement, sharing an excerpt from the latter at a group reading by Marlboro faculty and staff as recently as 2009.

“He was also a great lover of classical music, attending many of the Marlboro Music Festival summer concerts on campus when he was back in the U.S.,” said Ellen McCulloch-Lovell, president. “With his kindness, perceptions into others, and erudite conversation, Birje made friends wherever he went. He will be greatly missed by his Marlboro College and community friends.”