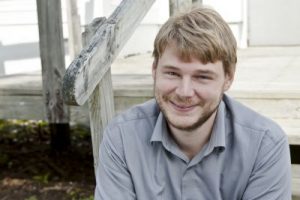 Students of economics have a new professor to collaborate with at Marlboro this semester. John Rush joined the faculty in August, and is teaching two classes, International Economics and Economics: Principles and Problems, during the fall semester.

John received his B.A. in economics and an M.A. in management from Whitworth University in Spokane Washington. He then went on to get his M.A. and Ph.D. in economics at the University of Hawaii, spending one year in Eastern Europe teaching.

“My research up to now has been focused on natural disasters and how they effect economic development of developing countries, poverty and education especially,” says John. He was recently quoted in International Business Times, reflecting on the declining value of the Argentinian peso and the impact on agricultural exporters and their markets.

Both of John’s classes incorporate the idea of reading novels from the perspective of an economist, using Mark Twain’s Connecticut Yankee in King Arthur’s Court and Daniel Defoe’s Robinson Crusoe. He says is excited to be in an environment that will allow him to do independent research on topics relating to economics such as natural disasters, gold rushes, and the history of economic thought.