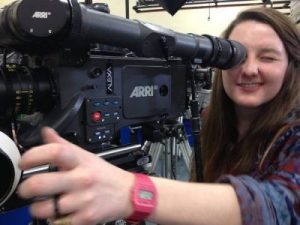 Filming has started in Nantucket for the production of Peter and John, based on Guy de Maupassant’s novel, through Marlboro’s collaboration with Kingdom County Productions. A team including 20 young professionals and 30 students from 10 colleges are working on the film, from making props to post production, as part of the Movies from Marlboro film intensive program.

“Students have worked hard throughout the semester but today they move with a sense of purpose not seen before, as they start to navigate this challenging multi-layered landscape,” writes film and video professor Jay Craven on the first day of shooting. “Professionals take time and show patience orienting the students. Our team, not including actors, numbers 57, with students performing jobs for the first time today—jobs they mostly didn’t know existed two months ago.”

Three events in Nantucket will also be staged in the coming month—a look behind the scenes at production at the Nantucket Atheneum (April 21, 7pm), a fundraising gala to meet the cast and crew at the Dreamland Theater (April 25, 6pm), and screening of the 2011 Sundance film Sleepy Time Gal (Dreamland Theater, April 30, 5pm), which stars Jacqueline Bisset (who is playing Lucia Childs in Peter and John).