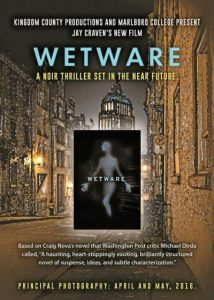 “We’re excited to move into production, after eight weeks of preparations, classes, workshops, visiting artists, casting sessions, location searches, costume and prop acquisitions, and so much more,” said Marlboro film professor Jay Craven as quoted in the Brattleboro Reformer today. Jay is director and producer of the latest Movies from Marlboro production, Wetware, which started shooting at the Latchis Hotel this morning.

Wetware is the third production of the Movies from Marlboro program, a semester-long intensive that provides college students from across the country the opportunity to experience and learn from shooting a full-length feature movie alongside professionals. This year participating students have come from 12 colleges, including University of California at Berkeley, Wesleyan University, Sarah Lawrence, and of course Marlboro College, to film Wetware, a noir thriller set in the near future.

“Wetware’s vivid characters are originals,” said Jay, “flawed, dimensional, and a little absurd. The film will dig into fertile themes of love, work, and freedom, genetic engineering, social costs of living in a wired age, the power of music, and what it is to be human in trying times. We also promise a few good laughs.”