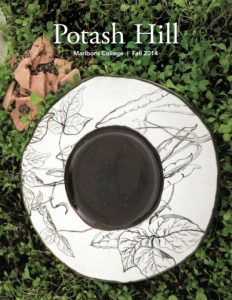 Marlboro community members and other readers are already familiar with the quality of writing in Potash Hill, Marlboro’s illustrious alumni magazine. But many others weren’t aware until Potash Hill was awarded the bronze award for “Best Writing” from the Council for Advancement and Support of Education (CASE) District 1, or the North Atlantic region. For magazines with a circulation under 25,000, Potash Hill came behind Brown University (gold, for their medicine magazine) and Tufts University (silver, for their dental medicine magazine).

“I think it’s significant that Marlboro, with its emphasis on clear communication and clear thinking, has an alumni magazine that demonstrates the value of good writing,” said Potash Hill editor Philip Johansson. “Brown and Tufts are good company, considering our entire communications department is composed of three people. Potash Hill is an amazing value for the resources available to Marlboro.” The magazine was recently redesigned and reformatted, following an extensive community engagement effort.