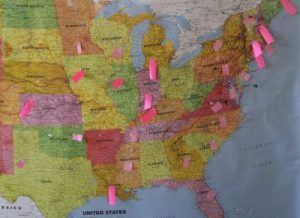 Marlboro College is pleased with the outcome of the Renaissance Scholars program, a scholarship introduced this year to attract students with wide-ranging interests and a desire to make the world a better place. With the application deadline of January 15 come and gone, an impressive 110 applications for the scholarship were submitted from prospective students in 34 states. The total number of Marlboro applicants is twice as high as the same time last year.

“We are so impressed with the quality of applications for the Renaissance Scholars program, and what they will potentially bring to Marlboro’s learning community,” said Brigid Lawler, dean of admissions. “In fact all of our applications this year are first rate, both academically and in terms of community leadership, and I attribute that to the bold national profile afforded by the scholarship program.”

Renaissance Scholars applied from as far away as Alaska and Hawaii, and all across the United States. Many of the prospective students are from states that typically send students to Marlboro anyway, like the New England states, New York, and California. But there were also applicants from Kentucky, Virginia, Iowa, Louisiana, and other states from which Marlboro rarely draws students. These far-ranging applicants achieve one of the goals of the Renaissance Scholars, to build on the diversity of backgrounds and viewpoints that make Marlboro such a vibrant learning community.

A comprehensive national marketing strategy for the Renaissance Scholars program was helped tremendously by alumni and other friends of the college who spread the word to friends and family. A Facebook post announcing the scholarship in October had 541 direct “shares,” and was viewed by more than 20,000 people, a Marlboro record.

“Marlboro notified winners in February,” said Brigid. “But the ultimate victory will be for the Marlboro College community, which will gain a population of new students with interdisciplinary intelligence and the tenacity to realize their most ambitious goals.” Even applicants who do not receive the Renaissance Scholarship can expect a generous financial aid package, so the effect of the program on the student population and culture will be significant.