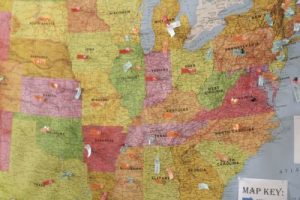 As most in the Marlboro community know from the recent fall appeal, the college is undertaking a large national campaign to attract students who are academically curious and engaged in community building. What you may not know is that you can also help us find students for this effort, known as the Renaissance Scholars program.

“Renaissance Scholars defy easy categorization, which makes finding and recruiting these ‘needles in a haystack’ challenging for a small college like ours,” said Brigid Lawler, dean of admissions. “When we find them—and vice versa—their wide-ranging interests, bold confidence, and craving for intellectual adventure makes them ideally suited for a Marlboro education.”

Marlboro has sent colorful brochures to roughly 55,000 contacts across the country, including both students and guidance counselors, as part of an integrated marketing plan. A social media announcement reached a record 20,000 viewers, with nearly 2,500 likes, comments, and shares—with one post, the engagement level with the college’s social media increased 275 percent in October. But perhaps the most exciting development has been at Town Meeting, where students, faculty, and staff staked their claim on states across the country where they had contacts with which to share the program (pictured below).

“It is gratifying to know that the entire college community is working together on this Renaissance initiative,” said Matthew Barone, chief external relations officer. “The annual appeal has already been quite successful, raising $1.3 million of our $1.85 million goal and going a long way toward supporting the Renaissance Scholars program, but what we need now are qualified applicants.”