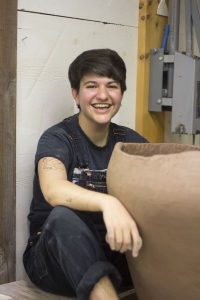 Each year scholarships funded by generous donors recognize the unique gifts that students bring to the Marlboro College community. The profiles below are followed by a complete list of scholarship recipients for the 2015-16 academic year.

Junior Bella Ortiz-Wren (pictured, right) had not heard of Marlboro’s endowed scholarships, so was not expecting the recognition of both a Windham Community Scholarship and a Thomas Thompson Trust Scholarship this year. A visual arts student with a focus in ceramics, illustration, and mixed media, Bella says one of the most engaging things about making art is the “opportunity to be influenced.” “To me, being an artist means being open to the way people and events shape you, which extends into what you make. I think that’s a great way to work, live, and share—being open to influence.” Bella finds Marlboro a special place because it is constantly in flux. “I feel so much change happening across every semester, and that’s all reliant on who’s here and what they want to do. There’s something uniquely challenging about a place like this. You learn a lot if you stick it out.”

In addition to recognizing recent graduate Christopher Maleney’s gift for writing, the Christopher Boeth Scholarship held special significance for him because it was named for a classmate of his mother Kathryn Burk Maleney ’84. Christopher completed a Plan in in literature, history, and fiction writing, with a focus on how individuals subject to empire become aware of and choose to help the downtrodden. “We often see the actions of empires in the modern world, but speaking against them is difficult, and I have enjoyed exploring what allows those who choose to see beyond their own moral systems to do so,” says Christopher. He appreciates the opportunity that Marlboro provides to explore what interests him, to take the time to understand his own ideas. “The isolation that creates such an intense community of learning is very unique to Marlboro, and not easy to find outside of it.” 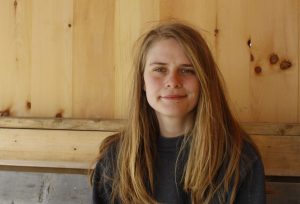 “Marlboro is special because I have the opportunity to pursue very specific interests of study, and grow personally from them as well as academically,” says Sasha Iammarino ’16, who completed a Plan of Concentration in anthropology and photography. “Also, I really appreciate how the community is very unique and close.” Sasha was awarded the Lillian Farber Scholarship, which recognizes her engagement with and passion for social justice. For her Plan she specifically looked at how Brazilian migrants negotiate their contrasting and sometimes difficult experiences in both their hometowns in Brazil and their adopted communities in Martha’s Vineyard, Massachusetts. “This subject excites me because I grew up in Brazil, where my mother is from, so I am able to identify with and learn from the Brazilians’ experiences,” she says. “The photography is of interest to me because I have always found it an effective way of communicating different perspectives.”

“I’ve known I wanted to go to Marlboro since I was 10,” said junior Kaitlyn Sanders, who was awarded the first ever Lucy DeLaurentis Scholarship. Marlboro has long been a special place to Kaitlyn because she grew up regularly visiting campus, where her father worked in the kitchen for many years. “I was very excited when I heard that I would be receiving the scholarship,” she says. Kaitlyn’s course of study is focused on photography and writing, with a Plan of Concentration using these media to explore how gender, trauma, and sense of place affect identity. She plans to make a series of artist books containing photos and personal narratives on this subject. “I am really interested in how people express their identity, and how societal pressures affect this.”  This new scholarship is in honor of Lucy DeLaurentis ’10, a beloved community member who passed away in 2015.

The Robert Sheldon Stainton Scholarship is awarded annually to an upper-class student for academic achievement and community service. Solomon Botwick-Reis

The Warren R. Sisson Scholarship is awarded annually to an upper-class student for academic achievement and community service. Logan Davis

Christopher Boeth Scholarships are given to juniors or seniors whose Plans of Concentration are in the field of literature or writing, and who have demonstrated a gift for and an appreciation of the usage of language. Lauren Hunley, Christopher Maleney, Lindsay Stevens

The Jean Crosby Markham Scholarship is given to a junior or senior who best exemplifies the grit and determination needed to complete his or her education. Dylan Murphy-Mancini

Lillian Farber Scholarships are given to juniors or seniors whose Plans of Concentration demonstrate a passion for social justice. Ian Hitchcock, Sasha Iammarino

The Wolf Kahn Scholarship is awarded annually to juniors or seniors who demonstrate talent in the visual arts. Sterling Trail

The John Kenneth Galbraith Scholarship is awarded annually to a student who shows the promise of excellence in the fields of literature, economics, or social policy. Carin Wales

Lucy DeLaurentis Scholarship is awarded to a student who has overcome personal health challenges to persist in studies at Marlboro College. The scholarship is a memorial to Lucy, a 2010 graduate, who, despite working through hospitalizations to complete her Plan, was a presence and force on the Marlboro campus and considered her time here the best years of her adult life. Kaitlyn Sanders