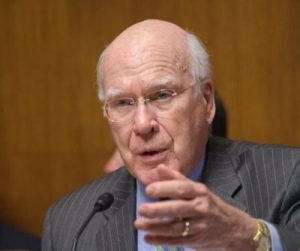 Marlboro College is pleased to announce that U.S. Senator Patrick Leahy of Vermont will address the class of 2015 at the 68th graduation ceremony on Sunday, May 17.

“We are very honored to welcome Senator Leahy, Vermont’s senior senator and a respected national statesman, who has been a dedicated supporter of higher education over many, many years,” said Marlboro President Ellen McCulloch-Lovell, who was chief of staff to the senator from 1983 to 1994. “His global perspective, leadership, and commitment to active citizenship are consonant with the identity and values of Marlboro College.”

“Marlboro College has carved out its place as a valued institution of higher education in Vermont,” said Senator Leahy. “By encouraging its students to challenge long-held ideas, it is preparing them for a changing world, a world where a 50-year embargo of Cuba has brought us nowhere and global warming stands at our door step—a world where their perspective and ideas are needed now and into the future.”

Leahy ranks first in seniority in the U.S. Senate and is the president pro tempore emeritus. He is the ranking member of the Senate Judiciary Committee, and the senior-most member of the Appropriations Committee and Agriculture Committee. A true statesman and a skilled and successful legislator, he is a stalwart leader in the areas of human rights, environmental conservation, technology issues, privacy rights, farming, and many other pressing national issues. He is the “father” of the enormously successful national organic standards and labeling program.

In the area of higher education, Leahy has been a consistent supporter of financial aid programs, promoting affordable student loans and increasing funding for Pell Grants and federal work-study programs. He believes that the federal government must rise to the challenge of increasing tuition rates and improve financial aid programs to ensure that college is an affordable option for all qualified students. Just last year he led a bipartisan effort to clarify the rules around nonprofit lenders, securing the positive role played by the Vermont Student Assistant Corporation for college students from Vermont.