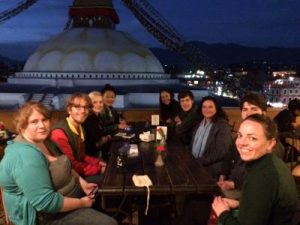 Marlboro College faculty and students returned from a class trip to Nepal less than three weeks before the devastating April 25 earthquake there, which has cost the lives of more than 7,000 and left hundreds of thousands homeless. Now the class is spearheading a community-wide effort to support relief efforts in the South Asian nation.

“I left Nepal so full,” said politics professor Lynette Rummel, who accompanied students for the Embodying Diversity: Religious Communities & Practices in Nepal class on their two-week trip. “I knew Nepal would always and forever have a special place in my heart. I could not believe my ears when I first heard about the size and devastation of the quake, and I could not believe my eyes as I began to see images from the very places we had stood such a short time ago.”

Many of the historic places that the class visited in Kathmandu, such as Durbar Square and Bhaktapur, Buddhist monasteries and Hindu Shrines, many of them World Heritage sites, now lay in ruins. Even more significant, the toll in human life and human suffering has been staggering, and the death count may never be known due to the remoteness of many of the villages in ruins. “I could not believe that what I had seen and what I had experienced was gone from the face of the planet; that the photos I had taken were now of historic significance,” said Lynette.

Now members of the class, which was taught by Catherine O’Callaghan, assistant dean of academic advising and support, and Chelsea Ferrell, director of international services, have been rallying community support to send aid to Nepal earthquake survivors. They have already raised $2,500 through a fundraiser, which included a raffle of many of the items and photos they had brought back from Nepal as well as matching funds from key community members. They hope to inspire matching funds from other sources for a total of $5,000. The proceeds will go to the Shechen Monastery, where the group stayed during their visit and which is very active in ongoing relief and rebuilding efforts.

“Nepal is a second home for me, and I can’t think about the earthquake without my heart aching,” said Julie Rana ’06, Marlboro alumna and math fellow, who has been back on campus for two years along with her Nepalese partner Saurav Rana ’06. “I feel grateful that there are a few members of the community who went to Nepal recently, because they understand and feel the grief that those of us who have been there feel.

The Marlboro College fundraising effort continues this week with a silent auction of donated works of art by faculty and students on Thursday, May 7, and Friday, May 8, to further benefit Nepal relief efforts. The proceeds from this event will be donated to SEBS, the Society of Ex-Budhanilkantha Students, an organization of Nepalese people across the globe. “Saurav and I have connections to them, and know that they are using donations well and are doing a great job reaching rural areas of Nepal,” said Julie.

Local community members are welcome to participate in the silent auction, which will take place in the Marlboro College dining hall from Thursday at 11:30 am to Friday at 1:30 pm. After that, those interested are invited to make donations directly to SEBS online.

“The money we raise will be insignificant in the grand picture of things, but it is not insignificant: for we have been touched, and now we care deeply and personally,” said Lynette. “Events in Nepal are no longer just a story in the news. They are part of our lives.”