A profile of Leslie Reese Brown ’82 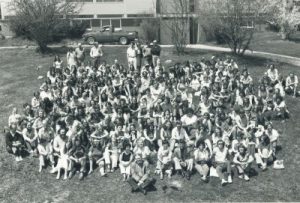 Leslie Brown fondly remembers her time at Marlboro College, where she studied literature with Geri Pittman-Batlle and Corky Kramer and “would float out on an intellectual high after almost every class.” So it’s no surprise that when her mother Jean Reese had a charitable remainder trust that matured in 2016, to be transferred to beneficiaries chosen by Jean and her three daughters, Leslie generously gave her quarter to Marlboro College.

“Some of my best memories of Marlboro were curling up in a big red leather chair in the library and reading in the dead of winter,” said Leslie. “An American Literature class with Dick Judd at his house was also a special time.  He served hot tea and Pepperidge Farm cookies—as a college student it is always nice to be in a real home.”

Leslie moved to Colorado in 1989, and was a fulltime mom until about five years ago when she began a kitchen and bath design program at the Art Institute in Denver. She does some interior design work now, and she has also started painting, which has become a great passion.

“My time at Marlboro enhances my life every day,” says Leslie. My work at Marlboro gave me the intellectual confidence to pursue any path I chose. For such a small community, Marlboro is dense with interesting people.”

Leslie’s mother Jean had the foresight to choose this attractive planned giving option that allowed her daughters to share in her generosity in a meaningful way, while she was still alive to appreciate it. Reflecting on her generous support, Leslie adds, “I hope Marlboro can sustain that most precious piece, which is the chance for young students to sit in a small class and have their eyes opened wide by deeply committed teachers. I hope that every student floats out of every class on an intellectual or creative high.”