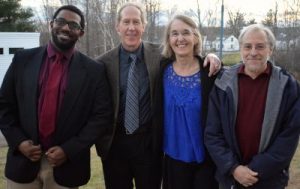 Marlboro College was pleased to present the world premier of Vermont Headstones, a set of songs for oboe, viola, and baritone composed by music professor Stan Charkey (pictured, right), as part of the Music for a Sunday Afternoon series. The new work was based on headstone inscriptions found in cemeteries throughout Vermont, from Marlboro to Mt. Holly, from the 18th and early 19th centuries.

The November 9 concert featured series regular Robert Merfeld (piano) and three colleagues from the University of Maryland School of Music, Daren Jackson (baritone, left), Mark Hill (oboe, second from left), and Katherine Murdock (viola, second from right). The rich program included music by Schumann, Prokofiev, Schwantner, Bach, and Bruch, but the highlight was Charkey’s new work. At times either poignant or humorous, but always haunting, this set of 12 songs celebrates the beguiling poetry of historic headstones and the remarkable lives of the people for which they stand in memory.

“I am from Vermont,” said violist Katherine Murdock, who has had associations with Marlboro for more than 30 years, starting with the Marlboro Music Festival. “I have relatives in Dorset and family members going back to the 1700s in Bristol, Vermont. So once I saw this piece I thought, well, maybe some of them have interesting gravestones. But none of them come close to this.”