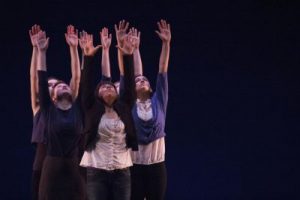 A dance performance created by Marlboro senior Hannah Ruth Brothers was selected for the gala concert concluding the New England American College Dance Association Conference, held at Boston University from February 13 to 16. The conference was attended by more than 500 students and faculty from 27 New England colleges, presenting 44 dances for critique by a panel of professional choreographers. Hannah Ruth’s piece, a quintet titled “Landing,” was among the 11 chosen for performance at the gala concert. Hannah Ruth performed the dance with fellow Marlboro students Sophia Romeri, Lily Kane, Erika Klemperer, and Martha Henzy, and music was provided by student Aidan Keeva.

“We’re so very proud of her,” said Kristin Horrigan, Marlboro dance professor, who accompanied the students to the conference, which sponsors this competition every other year. “Hannah Ruth has continued in the tradition established by Marlboro students before her.” In 2010, Marlboro had works by Amity Jones ’10 and former student Andre Morgan, while in 2012, a work by Cookie Harrist ’12 went all the way to the national conference in Washington, D.C.

“Each college may adjudicate two works, and at least one must be choreographed by a student,” continued Kristin. “We always take two student works, Hannah Ruth’s and a duet by junior Erika Klemperer titled ‘Oh Sweet Romance.’”