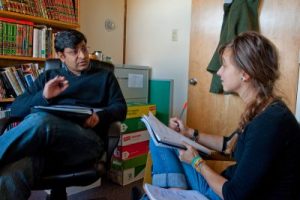 Since its founding, Marlboro College has promoted engaging classroom discussions, critical thinking skills, and close faculty interactions as a way to prepare for a promising future. Now small, liberal arts institutions like Marlboro have gained valuable, concrete evidence to bolster that claim. A recent study reported at the annual meeting of the Association of American Colleges and Universities strongly links certain characteristics of a liberal arts experience with future leadership, service, and fulfillment.

“Liberal arts education, especially in distinctive and academically rich settings such as Marlboro College, has a unique ability to anticipate change and prepare individuals for thoughtful, purposeful, and effective engagement in the world,” said Kevin Quigley, Marlboro’s president. “At its best, a liberal arts education stirs a passion for lifelong learning, looking at new opportunities as they come along, and making a difference.”

The study by Richard Detweiler, president of the Great Lakes Colleges Association, was conducted using 1,000 college graduates 10, 20 and 40 years after they left school. They were asked questions associated with certain skills learned in liberal arts schools, then asked about their life experiences since college. Among the results, subjects with a liberal arts background were significantly more likely to contribute to society, show leadership, and find meaning in their professional and family lives.

“The single factor in this study with the greatest impact on life success was faculty engagement on a personal level, something that is part of our DNA here at Marlboro,” said Quigley. “These kinds of findings confirm our long-held belief that a liberal arts education prepares you for a life unexpected.”