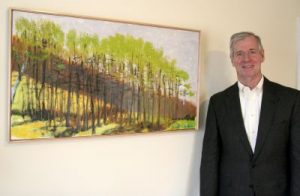 “With all that Wolf Kahn has done for the college over the years, it is only fitting that he would leave his colorful mark on the campus,” said Kevin Quigley, Marlboro College president. When Kevin first met longtime trustee Wolf Kahn, he was invited to pick out one of the renowned artist’s paintings to hang in his office. He chose a landscape of trees on a hillside, in bright greens and scarlet, very much like the landscape around the undergraduate campus in early spring.