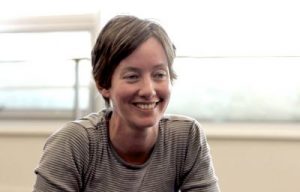 Marlboro College is pleased to welcome Jean O’Hara as a new faculty member, teaching an array of political theater, environmental justice, and gender studies in her theater classes. Jean has been teaching and directing for two decades and is interested in the way that theater can create dialogue leading to social change.

Jean received her BS from Rhode Island College, her MA from Humboldt State University, and her PhD from York University, with a dissertation exploring two-spirit plays based in Indigenous culture. She is also the editor of the anthology, Two-Spirit Acts: Indigenous Queer Performances, and says that studying indigenous societies has radically changed the way she views gender.

Jean uses her work to investigate themes of racism, sexism, classism, ableism, transphobia and heterosexism and believes in the power and efficacy that theater has to give voice to these traditionally marginalized groups. She has done work with the San Francisco Mime Troupe and Augusto Boal’s Theater of the Oppressed, and still adapts Boal’s philosophies on theater in her own teaching. “Ultimately, I utilize his work to investigate and challenge institutionalized forms of oppression,” she said.

Jean is passionate about using theater as a venue for environmental justice, and for creating and maintaining local food sources. She co-created and co-directed the play Salmon is Everything, which encouraged unity among farmers, ranchers, fishermen, and Native communities to all work for a cleaner river for a healthy salmon runs in California and Oregon’s Klamath Basin. At Marlboro, Jean is incorporating the community greenhouse into her class called Ecodrama: Staging the Environment and Community, which will culminate with harvesting their produce and making a meal combined with produce from other local farmers. “I see theater and storytelling as an important way to connect, build community, and create a much-needed space for the variant voices in and outside the college to be heard,” she said.