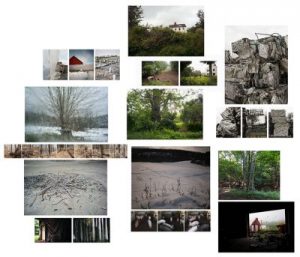 Photography professor John Willis and music professor Matan Rubinstein have collaborated to create a multimedia piece, part of the Eyes on the Land show that opened at Shelburne Museum’s Pizzagalli Center for Art and Education on October 3. The exhibition is the result of a partnership between the Shelburne Museum and Vermont Land Trust, where 13 contemporary Vermont artists and photographers were commissioned to produce new works using conserved lands as their inspiration.

“The Vermont Land Trust picked all these artists in Vermont, and we were invited to do whatever artwork we chose to do in relation to a Land Trust property,” said John. He and Matan were matched with the Bunker Farm, a diversified form owned by two young couples in Dummerston, Vermont. They contrasted images and sounds from that bucolic property with images and sounds from a scrap-metal yard in their composition called “Inhabitation, Production/Consumption.”

“Even though they’re very recognizable images from the places, and very recognizable sounds, it’s more atmospheric,” said John, who is looking forward to further collaborations with Matan. Their artwork, and the entire Eyes on the Land show, will be on exhibit at Shelburne Farms through January 3, 2016.