A study of the relationships between conceptual and performance art with a focus on artistic appropriation and authorship. 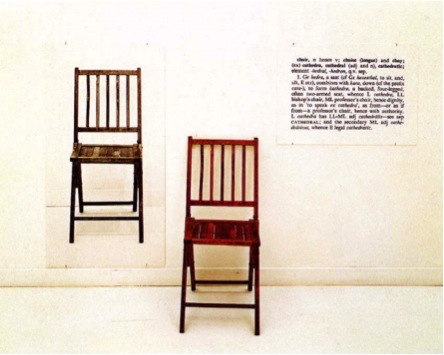 For most of human history, art objects were enjoyed primarily for their aesthetic value. At the start of the twentieth century, however, groundbreaking works of art like

Marcel Duchamp’s Fountain began to give artwork a new purpose. Upending the creative process of previous generations, the aesthetic qualities of an art object became secondary to its function as a vehicle for the artist’s ideas. This plan explores how that artistic philosophy came to define the Conceptual art movement, and how it reached its clearest expression in performance art.

Conceptual works like Jospeh Karuth’s One and Three Chairs use art objects to invite viewers to consider an idea of the artist’s choosing. By presenting three different but equally valid representations of a chair, Karuth compels the work’s audience to reflect on the true source of the object’s meaning. Conceptual performance artists, like Adrian Piper and Vito Acconci, dispensed with the art object and incorporated their own subjectivities by acting out their work. Finally, this plan exam

ines the complexities of becoming an art object in someone else’s Conceptual performance through the lens of the author’s experience at 2009’s PERFORMA festival.

“Conceptualists worked to undermine the expectations set by the Modernist paradigm about the political nature of a work of art, the relationship between audience and artwork, and the role of the artist. They set out to create work that engaged viewers and audiences in ways that connected them to the artist’s mind.”

“Within Conceptualism, I would argue, the technique of performance (or ‘Performance Art’) is the most successful method by which to undermine the art object and to shift the emphasis onto elements like process and ‘idea.’”