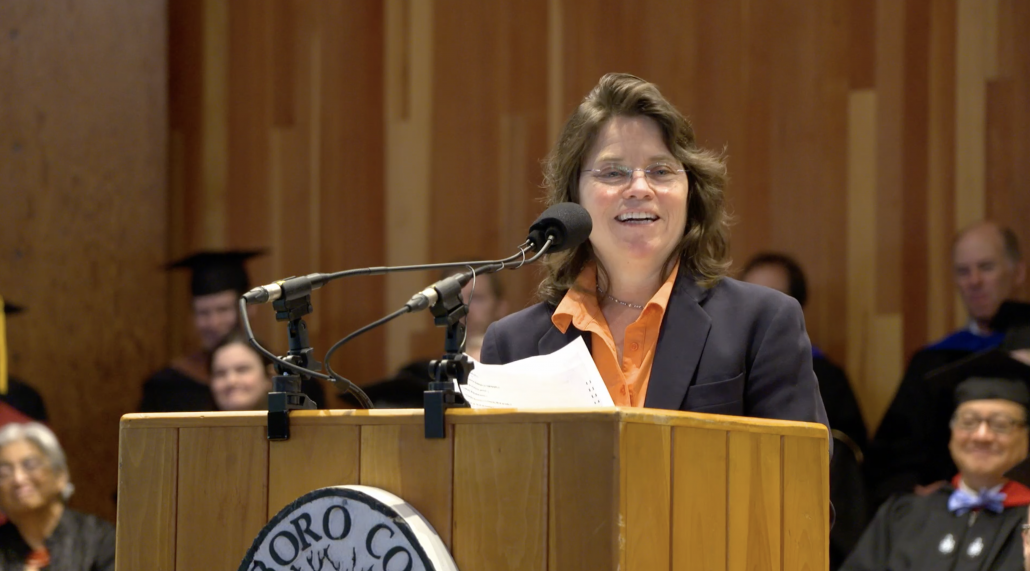 My dad is super sorry not to be here today. He is 91 years old. He gets up every day and goes to paint. Very few things would stop him from accepting an award, that’s pretty much his favorite thing to do. For those of you who know Wolf, which is about half of this room, you know he loves events like this.

He did share some words. He has been involved with the college almost as long as the college has been here. If it’s really 72 years old he would have been here in its early teen years. We came up here to Stark Road in 1968. We bought a farm that we still have because my dad is nothing if not a creature of habit. That house had no electricity and one of those pumps in the sink, and a bathroom that existed on the dirt floor in the basement. And that is still the home that they inhabit when they come up, which they will this summer.

He was asked to be on the Academic Advisory Committee, which he says, “met once a year, a bunch of professors from the college, President Ragle, and me.

Our ostensible purpose was to find ways to keep the students from having uprisings, as they were doing everywhere else. But Marlboro students were either too busy or clever to have their own mini-uprising.”

So he got involved in the board instead, and some of you may have heard him here sing with the chorale fantasy, which was always incredibly embarrassing to me as a child. Because he was always really loud. He’s been on the board for a long time, has happily supported Marlboro for many years, as has the Wolf Kahn and Emily Mason Foundation, and he counts among his friends four of the college presidents here including Kevin. And he says he hopes to enjoy his friendship with President Quigley for many more years.

He says, “I ascribe this honor which you’re granting me to my ability to spread colored butter on a canvas, which requires no special garb for it’s practitioners, aside from a paint splattered smock.” He thanks you all for this honor.